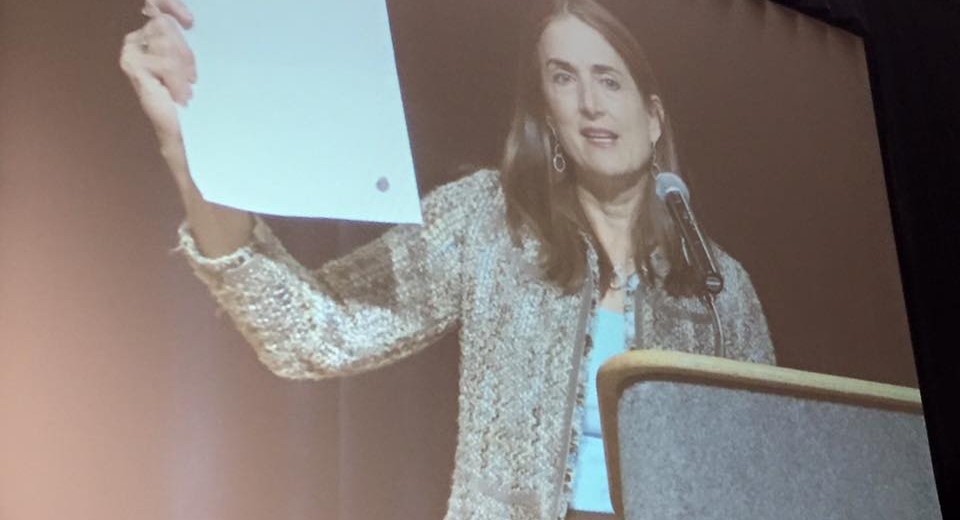 The Black Dot and Bringing the Conversation to Light

Yesterday, I had the honor of speaking at the Jordan Elizabeth Harris Foundation Bring the Conversation to Light Luncheon.  Wonderful organization developed in honor of Jordan Harris, who lost her life to depression at age 22. I followed Mark Ware who detailed the work MHMR of Tarrant County has done in suicide prevention and preceded Eric Hipple. Eric is a good friend, whom I had met years before at the Grant Halliburton Foundation luncheon and visited at the University of Michigan while touring their Depression Center.

Eric has done some phenomenal work with the NFL, military and college campuses breaking down barriers of communication and enlightening people on the power of human contact to dispel depression. He spoke lovingly of his son Jeff, who was lost to depression, and Eric’s own struggle with the depression, which he details in his book, Real Men Do Cry.

Ellen Harris ended the program with a courageous speech and showing a recent video created by the foundation that honors her daughter's name.

I am continually impressed with the efforts and steady persistence of the Harris family in opening the conversation about the impact of mental illness.

Here is my speech, which came out in a different order than is written here. I was concerned about making my 10-minute limit, but this is the gist of what I said:

For the past 14 years, I have been holding out my experience with depression as a hopeful sign that it is possible to recover and stay well. Most of the time my depression is outted voluntarily, I wrote SBL about the worst day in my life, my suicide attempts and recovery with electroconvulsive therapy and life change. As my husband Ken says, there are no secrets in the Hersh household.

Increasingly though, I am outed whether I like it or not. In 2008, my husband Ken had a chance to set up a London office. The four of us, Daniel and Rachel in 8th and 6th grade respectively, moved to London for a year. We knew no one. I was a little apprehensive about this considering all three of my major depressions had gray weather in common, I was leaving my support group behind AND our children were so upset about the move. Their universe revolved around the five mile radius that spanned from Preston Road and Royal Lane in Dallas, and they felt the move to London was unfair torture. After the first week in London, things seemed to settle. In the second week, Rachel, our then sixth grader came home from school with some interesting news.

“Hey Mom, we were discussing mental illness in health class today.” I was impressed, I’d been very open with my kids about my depression and hospitalizations. She continued, with that beautiful 12-year-old logical mind: “I told the all the people in the class that you were mentally ill.” PAUSE “but you did that SHOCK thing and everything was all better now.”

GREAT, I thought. I don’t know anyone and I am now prepackaged as a crazy person. No one will be my friend. No one will let their children come to our house – my brain went down the disaster tunnel fast. But guess what? None of that happened. I am happy to say, my outing not only did not deter friendships, it opened doors to some candid, deeply connecting conversations that I would have never imagined.

Depression is no longer a big reveal anymore, even in Texas. The problem is most people still believe it is, hiding their illness, struggling alone. I’m here to tell you that is not necessary or productive. Look to your right and to your left. I guarantee you, the person sitting next to you has been touched by mental illness in some way. When we are open with each other, we will find the support we need sitting right next to us.

It is easy to get discouraged by the lack of progress with managing mental illness. In Dallas, the recent murder of Dave Stevens by Thomas Johnson, and the subsequent suicide of Dave's wife Patti touched off a series of articles in the Dallas Morning News – some of which I found appalling.

With stories like these, it is easy to fall victim to the black dot. What is the black dot? Let me show you. A teacher once held up a piece of paper in front of her class and asked them “Write about this piece of paper.” The students scribbled great sagas about the meaning of the black dot – representing the end – a period, depression, a black hole, a cancerous mole. When she collected the responses and read them, she asked the class. What about the rest of the paper? What about the white space?

This dot is the situation that happened with Thomas Johnson, the murders in CO at a movie theater, the deaths at VA Tech, what happened to Gabrielle Gifford. The white page is the millions of people, including me, who are successfully managing mental illness. It is possible to manage mental illness. Do not fall victim to black dot thinking.

One of the biggest thrills of my journey through depression has been the foundation of the Center of Depression Research and Clinical Care at UTSW. Under the direction of Dr. Madhukar Trivedi, Internationally renowned expert on depression and winner of the 2015 American Psychiatric Association Award for Research, the Association’s most significant award for research. The UTSW Center for Depression Research and Clinical Care has tour major objectives.

1. Early detection of disease. The key to battling the deadly disease of depression and bipolar disease is catching the disease early. Some of you may remember me pounding on the podium last year demanding a mammogram for mental health. Dr. Trivedi and his team are developing exactly that. In two different research projects, Trivedi is trying to find the root of where depression starts by studying people as they are well, before the disease begins. Most psychiatric studies only study people after the disease starts, making it hard to detect the origin of the disease. In one study, Dr. Trivedi in his team are already working with 16 clinical care facilities using a software program called Vital Sign 6. His belief is that mental health is the 6th vital sign. Patients seeing their primary care physician for any reason – a well check, the flu - complete the Vital Sign 6 questionnaire. Blood is taken and Trivedi and his team are collecting the data to analyze if the patient is showing signs of depression. Over 14K have already been patients screened using VS6, about 11% have been diagnosed with a form of depression – cases that would normally have been overlooked. And the great news is a large majority of these patients, about 90% have been able to be treated by their primary care physician. I don’t know how many of you have tried to find a psychiatrist for yourself or a family member, but psychiatrists are overbooked and in short supply. This approach allows more standard cases to be handled by a primary care physician, when the problems are small and easily handled.

2. Once detected, the second objective of the center is connection of patients to right portfolio of treatment. I don’t know if any of you have tried to find treatment for yourself or a family member of friend. If you have, you are familiar with the roulette wheel of medicine that is now practiced when attempting to determine treatment for psychiatric care. Dr. Trivedi’s approach is to use biomarker indicators to determine the right course of treatment.

3. The third objective of the center is to assist those whose symptoms persist despite care from their primary physician or primiary psychiatrist . These people will be able to take advantage of the expert advice of a panel of professionals at UT Southwestern.  They will work with you primary care doctor to determine the best way form of treatment.

4.  Finally, Dr. Trivedi is pioneering a research project that will be a longitudinal study of high school students in Southlake ISD.  This study will follow both well and students with depression to find similarities, differences and lifestyle changes that can influence results. Ellen Harris made the exciting announcement about a $50,000 gift to the UTSW Center for Depression Research and Clinical Care, which will likely be oriented toward this study.

I am very excited by the incredible progress Dr. Trivedi and his team has made in a very short period of time. My dream is a few years from now, most primary care docs will be using some form of Vital Sign 6 which will allow them to help people avert the deadly impact of mental illness. And yes, mental illness is deadly as the people in this room know too well. There are almost as many people who die by suicide in this country as who die by breast cancer. Our silence and our fear is stealing lives.

In that light, I leave you with a challenge. Dare to challenge your perception of how you will be treated if you are open about mental illness. Talk to your friends, your colleagues, the members of your religious and social groups. You will be astounded at the support network you will discover, the friends you will uncover, and the lives you will save.

Thank you very much

"It is my pleasure to recommend Julie Hersh as a public speaker. She is well qualified to speak on the topics of depression and suicidal behavior. She is knowledgeable about contemporary psychiatric treatments and has been diligent in seeking information from medical experts in psychiatric medicine. She is an articulate, engaging and authoritative speaker who ably communicates her important public health message."