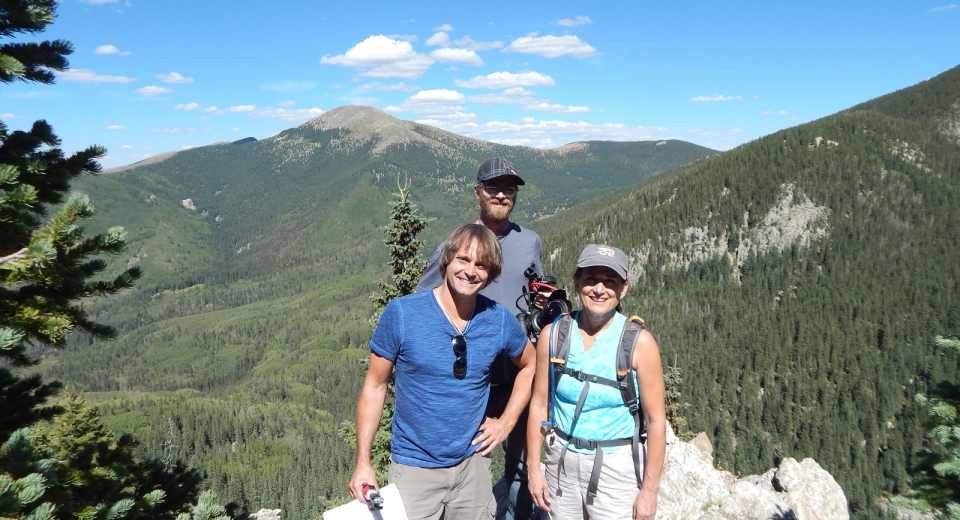 I read Rick Hanson's Buddha's Brain this month and am trying to put into practice his idea of savoring experiences. His theory is our brains are predisposed to negativity. In this TED talk, he mentions that for every five positive experiences we have, one negative one wipes them out. This worked well in prehistoric humans - the person entranced by blue sky often ended up being lunch. But in today's world, that receptiveness to negativity can leave a person anxious and depressed.

I've been trying to savor things on a daily basis, but this month I had three major experiences specifically related to Struck by Living - I only have a few minutes this morning, so I can only elaborate on one. Here are the three highlights from last month: 1. Jordan Harris Foundation luncheon on November 7 - more on this one in a moment.

2. Release of the Mental Health Channel's documentary. Jeff Fraley and his group had me go back to the mountain where I attempted suicide in 2001 and tell the story to my now 20 year-old son. I've blogged about this for Pscyhology Today: An Unexpected Thanksgiving Story and here is the link to the documentary: http://bit.ly/1yuS89f. The photo shown is me on this same hike when Daniel was one (1995).

3. Publication of an article about Decidí Vivir (the Spanish translation of Struck by Living) in Nexos magazine. Nexos is the Spanish/Portuguese version of American Way and has a readership of 45 million. In my prayer life, I often have these frank discussions about what the heck I am supposed to be doing. I'd recently looked at the Amazon book sales for Decidí Vivir and seen that only three were sold. I don't really care about the money associated with the book, but my friends Jorge Correa, Ramir Camu, Monica and Emilio Pimentel have put a tremendous amount of time and effort into this book, without pay, in the spirit of making the world a better place. I was feeling kind of ticked off that we had all made this much effort, and the book was just sitting on the shelf. I sent up a message - "Hey! You got this thing rolling. If You want to have it go anywhere you better jump in and help." The Nexos article was published the next day, here it is: http://hub.aa.com/es/nx/decidi-vivir. Now I've done enough of these things to know that even this level of exposure may not sell books, but at least we are getting the message out into the hands of people it might help. Nice to know that Someone is listening!

That is the snapshot, let me take a moment to savor the Jordan Harris Foundation luncheon. This one of the most positive events I have ever attended addressing suicide and mental illness, ranking with the talk I did in Harrisonburg, VA several years ago for Walk for Hope. It was a stunning fall day, and on my ride from Dallas to Fort Worth I just kept thinking - I have to start this speech with humor. The Harris family lost their daughter Jordan to suicide. 22 years old, gorgeous, bright young woman. She was diagnosed with depression and died by suicide four months later. I was the keynote and knew my speech would set the tone for the event. I usually would never start with humor in this situation - too risky - too easy to offend everyone. However, I've spoken at enough of these events to know that it had the potential to be as depressing as hell. I wanted to inspire people to have hope, to breathe, to listen. Humor, I've found, is the key to unlock minds. It allows us to relax.

I began with the story about my son Daniel who, when he was eight years old, asked me - "Mom when you were depressed, did you think about suicide?" I agonized about my answer, but realized if I really believe depression is a disease, often gentically transferred, I needed to be honest.

Daniel paused, thought for a moment and said "So in the Great Depression did everyone try to kill themselves?"

I used that story as an entry to the idea that our perceptions about stigma and rejection are often the biggest obstacles to communication. The speech was well received, well attended (at least 700 peope if memory serves) and several quotes from the speech recorded in this article in the Star Telegram. In a beautiful video the Jordan Harris Foundation produced about their daughter and foundation, Ellen and Tom Harris (Ellen shown in blue and Tom below) say that 9 out of 10 people who they have spoken to about his daughter's life and death have met with stories of their own. I would say my experience has been the same. For the handful of times I have been shunned or treated badly after speaking out about this issue, literally thousands have thanked me for being open. Sometimes, I believe, all the focus on "stigma" only creates more stigma. Jordan Harris Foundation video.

My most favorite moment about this talk was afterward. A young woman, who was friends with Jordan told me that she had felt so guilty about Jordan's death. My talk that day released her, and helped her to see that depression is a disease. What Jordan did was not because of her friend's omission, or that Jordan did not love her. Her visible relief made the whole trip worthwhile.

Oh yes, and my other favorite part of this day was that I was interrupted in my speech with enthusiastic applause from the audience. I was talking about how we needed the equivalent of a mental health mammogram for early detection. The applause caught me so off guard I thought it was a subtle hint that my time was up and I needed to get off stage. Pretty funny. I recovered, and as you can see from the Star Telegram article, people absorbed the message.

Headed to Menninger Clinic in Houston today. I'm in a rush (as always) but I'm going to try to savor the moment. There's lots to appreciate in life if we only take time to look.