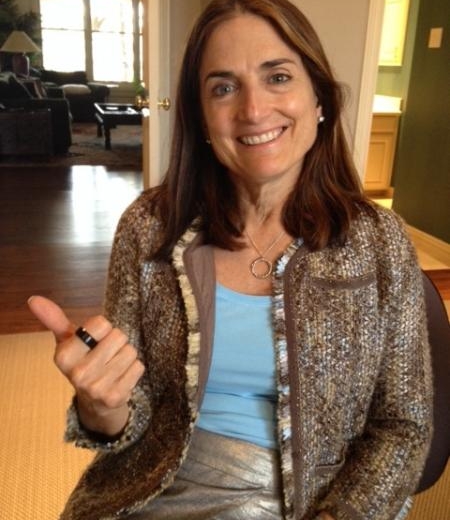 Me (Julie) with the black ring earned for Honor Courage Commitment

It's been an exciting couple of months at the start of 2014, so exciting that I have been completely remiss about putting anything on the website. We have lots of good news!

For those who want a quick list of the new Psychology Today blog posts since I last wrote, here's the link.

First I've hired Kristi Bernstein as Director of the Hersh Foundation. Kristi is going to help me organize all the activities for Struck by Living as well as our family foundation. She will be blogging on this site occasionally, helping me keep up with all the latest news.Here's a photo of Kristi so you can know who she is. A mother of three, Kristi loves to travel and this picture was taken at a museum in Lillihammer, Norway. Kristi (on the right) with her new mannequin friend.

So what the heck have I been doing? Let's work backwards because I am having such a great time today. I did an interview with Andy Nguyen about Honor Courage Commitment, HCC, a fabulous organization that helps veterans transition into cilivian life. Here's the article I published on Psychology Today: An Ounce of Engagement.

One of the programs that HCC offers is something called #KILL22. For anyone who does 22 push ups to honor those who serve in the military and makes a donation to HCC, they receive a black ring. 22KILL is a name to bring awareness to the fact that 22 veterans a day die by suicide. When I pumped out my 22 push ups, I posted them on my Struck by Living FaceBook page. I heard through the grapevine that my son Daniel saw the video and said my pushups weren't "real" push ups. I challenged that I would donate to HCC for every woman he could find who could do push ups better than me. People started responding, and so I gave a time limit (48 hours) and challenged men and women to do 22 push ups, promising a $100 donation for every complete set. Well, it's starting to go crazy.

We just got a video of 16 Marines doing 22 pushups to add to the effort (on the SBL FB page) and the videos are piling up as we speak. I put a cap of 10K on the effort and am fully confident that HCC will get that donation.

I've also been working on Decidí Vivir, the Spanish translation of Struck by Living(SBL). In 2010, when I initially published the book, I did a show on KERA (our local NPR station) Think! show with Krys Boyd. A young man whose mother was suffering from depression listened to the show and recommened the SBL to his father. The father, a native Spanish speaker, felt that his wife would better understand SBL better in her native Spanish. He translated the book page by page to her in the hospital.

When Jorge Correa reached out to me to thank me for the book, he realized that we were the Hersh family that had been so active at the school where he worked (St. Mark's School of Texas). Our son Daniel (Andrew in the book), attended St. Mark's at the time. I became good friends with him, and he ended up teaching Daniel. I casually mentioned to Jorge that there had been several requests for a Spanish translation and he said "I'll do it." When I offered to pay him, he refused. He said it was his gift back to me. WOW.

We are getting very close, and anticipate having the ebook done in a few months and the paper version of the book completed by the end of the year. LOVE the new cover, but we don't have it copyrighted yet. Will post as soon as we do. Ramir Camu designed the cover, inspired by the painted rock Kristi Jamason painted for me which is described in the book. In addition to everything else, I have remained very involved with the Dallas Theater Center. The DTC recently had the world premiere of the musical "Fortress of Solitude". I wrote this Pscyhology Today blog about that and some funny things that happened with our Spanish Translation team:

Finally, I took the SMART class at the Center for BrainHealth. It was an amazing experience where I made the connections with the veterans who connected me with HCC. Here the Pscyhology Today blog for that:

Life Lessons of a SMART Class

That's about it for now, will try to be better about writing -

Have a great rest of the week and a fun weekend!