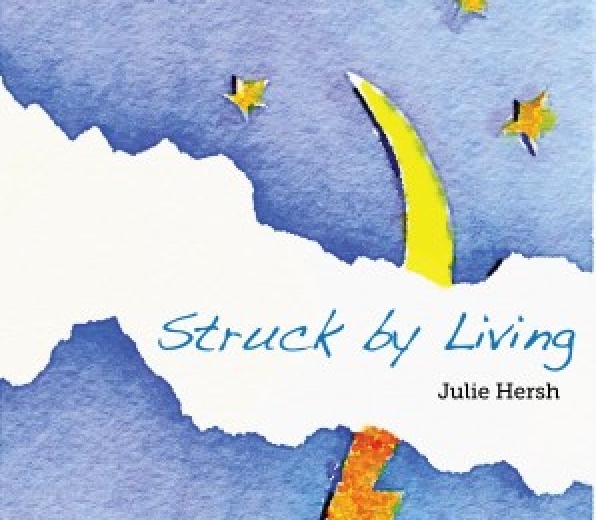 Struck by Living - the Title and Cover - How did it Happen?

I wish I could remember the origin of Struck by Living as the title of my book, but unfortunately that story is lost to the ages. I figured people would confuse the title with Struck by Lightning (which they do, frequently), but liked that. Lightning plays heavily in the book in a few spots: in Chapter 22 “Threads of Connection,” when my friend Kristi Jamason paints me a rock to help me slog through my depression, in Chapter 24 when I hike undeterred despite the lightning storm and in a more abstract way it’s a nod to the electricity that saved my life (ECT Electroconvulsive Therapy).

Being one who likes dualities, the idea of being struck down or struck in awe of life made sense. My original publisher remained unconvinced. They felt Struck by Living was too abstract, people wouldn’t get it, it didn’t explain the book, etc., etc. Their objections made sense, but when I pushed them for alternatives, they couldn’t produce any.

Stubbornly, I persisted and the name stuck. In the original publication of the book in 2010, this same publisher missed a typo in the left-cover flap, using “Stuck by Living,” as the title. Once I calmed down (we’d published 10,000 of these puppies, and I had signed off on the final print proof – so I had to live with it.), I found this hilarious. Stuck by Living – it fit! To be honest, I didn’t notice it until someone reviewed my book and pointed it out. The first cover of the book was a battle too, one in which I succumbed. I had a vision in my head of “the rock” Kristi Jamason painted as the book cover. Again the original publisher didn’t like my idea. Did I mention this was a self-published book? Geez. Took me turning 50 to realize I didn’t have to pay people so they could tell me their creative genius far exceeded my own. The front and back of Kristi's rock areshown below. The first cover was a compromise. The dandelion image they created allowed me to incorporate some text I’d cut from the original manuscript about my dad and weeding. My father paid me to weed, a penny a piece. I hated the job. No matter how carefully I pulled, my roots snapped, parts stuck in the ground. You have to get the whole root,” Dad told me. “Otherwise the weed grows back.”

Once again I felt really deep and mysterious. I’d left a metaphor for the reader, hoping someone, somewhere would notice the pale writing above the dandelion and ask me about it. Was this real? Yes. Did you intend this as a metaphor for depression? Yes. Never happened. I wonder if other writers dream about having a Knight of Shining Reader (heck could be a man, woman or undecided, I don’t care!), who catches all the little gems hidden in her work. That person did not materialize.

We ran out of copies and I switched to Greenleaf Publishing.  We simply reprinted using the same cover (2011). Switching publishers zapped my energy and my mother was reaching the end of her life. She passed on March 23, 2011. Still traveling intensively and talking about the book, and dealing with my mom’s declining health and death, switching the cover didn’t hit the radar of important tasks. Did I mention I had kids in high school too? Clearly I was younger then. Just reading this exhausts me.

When we published the Spanish translation of the book Decidí Vivir, I showed my precious rock to my good friend Ramir Camu. He spent an afternoon with construction paper and glitter and created the cover now used for Decidí Vivir and the new publication of Struck by Living in 2017. Again we ran out of copies, so we had to reprint. The story of Decidí Vivir is beautiful and sad, one I will write about one day soon. Both the person who translated the book, Jorge Correa, the people who regionalized Jorge’s Chilean Spanish into a more Mexican Spanish (Monica and Emilio Pimentel) and Ramir Camu, all insisted that they gift their services. Can you believe that? People who work for free to support an idea they think is important. I guess I shouldn’t be surprised; I did this too. They are all now treasured friends.

In the spirit of being struck in awe, it is so strange that this horrible period of my life spawned friendships, creativity and life I never imagined that day in the garage.

Even you, the person who takes time to reads my stroll down memory lane. Thank you for listening. Thank you for this connection. Each word read binds me to this earth in a positive way.  Whatever happens to me in the future, the past has taught me my crystal ball is always inaccurate. Healing is possible. We just need to hang around long enough to see what happens.

Have a great week!