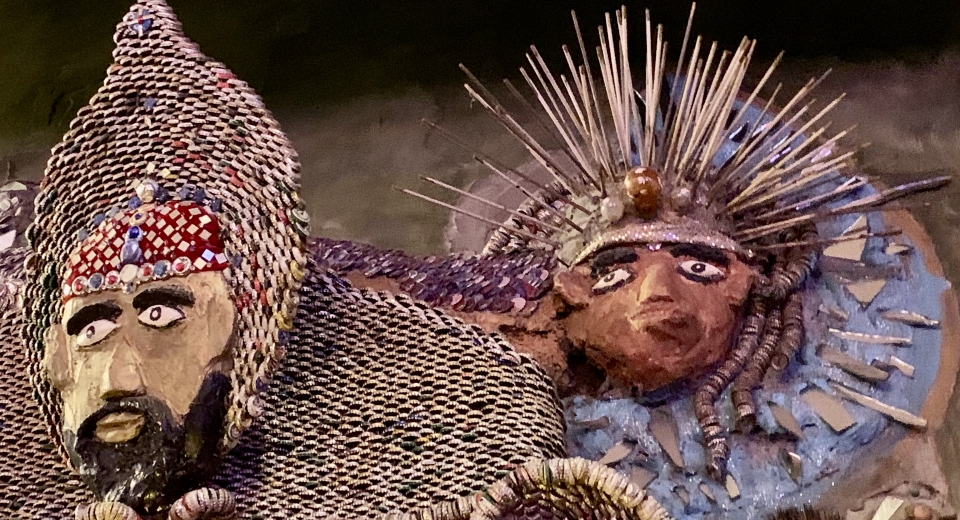 The Road to Imagination

In 2003, when my son Daniel was an elementary student at St. Mark’s School of Texas, a few of us moms got the bright idea of bringing Gregory Warmack aka “Mr. Imagination,” aka Mr. I to St Mark’s School of Texas. We felt this unique artist might inspire our young sons to explore art. Not wanting our daughter Rachel to miss out, I expanded Mr. Imagination’s Dallas tour to include Alcuin Montessori School (then called St. Alcuin’s).

I worked furiously on this project, enamored with Mr. I’s work and the funky story of how he didn’t have a place to sleep because he piled so many recycled objects on his bed that he slept on the floor. He found art everywhere, where most people saw trash and turned away.

Finally, once all the logistics and planning to get Mr. I to Dallas were completed, my husband Ken had another invitation. President George W. Bush extended an invitation for our family to visit him in the White House. There was only one problem. The visit landed on exactly the same date. Mr. I was scheduled to come to Dallas.

Mr. I’s visit took months of coordination with him and the two schools. Plus Mr. I’s resilience and creative verve inspired me. He’d been shot, survived a fire and more. The guy was art’s Six Million Dollar Man without metal. President Bush is wonderful. I’d met him several years prior at a baseball game, when we brought food into his suite at the old Arlington Stadium. He hadn’t even run for governor at that point. He was more than a little irked that we brought our own food when he gave us free tickets. Maybe I was afraid of him? Don’t think so. I just really wanted to meet Mr. I.

I told Ken he could go, but the kids and I had other plans. Suffice it to say, Ken was not happy. Somehow the visit got rescheduled, Ken probably telling a white lie about me being in a car accident and not able to walk. How do you turn down a standing President? That’s my Ken, master of dealing with complex situations.

I held my ground.

Did I mention that my husband, 20 year later, is now President and CEO of the Bush Center? Guess President Bush didn't hold our reschedule against us.

Mr. I came to Dallas and exceeded all expectations. He taught all of us to see things with a new eye. Always on the hunt for new objects to transform, he collected things everywhere he went. The day before he left, he looked at me with those soft brown eyes and asked, “Can you please find me a suitcase so I can take all these new findings home with me?”

He had me at “Can you please. . .” I bought him a suitcase and helped him pack his bag.

Here are a couple of shots of Mr. I and my son Daniel. Daniel’s now almost 26 working in New York. When Mr. I left, he gave me an art fish. He noticed that I had lots of fish in my house and thought it would fit right in. It did. My husband and I got married in an aquarium. But that’s another story. Flash forward to 2005. I went on a 10-day hike through the High Sierra with my crunchy granola friends, Kristi and Rand. Wildflowers everywhere, stunning, I hiked with a 35-pound pack (did I mention I’m 5 foot nothing and 100 and nothing?). I had never been on an over-night backpacking trip, but no matter. Got altitude sickness, had an out of body experience, recovered, climbed Mt Whitney. Had some very smelly shoes afterward. One of the top experiences in my life When attempting to fly back to Dallas upon completion of the hike, violent thunderstorms interrupted my plans. Ranks in top five of worst travel experiences I’ve had, and I’ve had a few. Delays, cancellations, and crew changes. We detoured to Las Vegas and landed at about 11pm. The airline agreed to put me up for the night in Las Vegas and fly me out the next morning.

Imagine going from complete wilderness – quiet, sky, wildflowers, a bear or two, rivers, streams for 10 days to Las Vegas. A very drunk young man on the bus ride to the hotel slurred “Hey, baby, you and me, tonight, let’s DO it.” I informed him I was old enough to be his mother. “I don’t care,” he dribbled, “you look hot NOW!”

Kind of hurt my feelings that he added the “now.” He probably assuming that when he woke up the next morning, he might not be so inspired. I shoved him away.

I walked through the Mandalay hotel – slot machines and bright lights everywhere. My brain spun, almost hyperventilated.  Then, as I turned a corner, I saw a bar made out of recycled materials. Could it be? I found a small sign explaining Mr. Imagination’s work and legacy. Suddenly the haphazard trip to Vegas seemed almost, well, destined.

Flash forward to a couple of weeks ago in 2020. My good friend Frances Waters made a Facebook post about African American Art at the Smithsonian. Frances and I got into some friendly banter about Mr. Imagination. I knew at that point that he had work in the Smithsonian. I googled to see him to see how and what he was doing.

I found his obituary.

He died in 2012. I felt simultaneously shamed that I didn’t know about his death and lucky I had the chance to meet him.

That happens with higher frequency these days. I’ll be 60 on May 6. In my almost 60 years, I’ve met a lot of people, particularly artists, who come in and out of my life. Lately, I worry less about keeping up with everyone, it’s a physical impossibility. I try just to enjoy them while they’re in my life, and soak them up. Hopefully, they get a little spark from me too, the crazy lady who loves their work.

Flash forward to this past weekend. I am a professed Leslie Odom Jr. fan. Many of you know Leslie as Aaron Burr from Hamilton. When he sang “talk less, smile more,” I felt he was speaking directly to me. For those of you who know me well, you know what I mean when I say I’m afflicted with Alexander Hamilton disease. I put WAY too much down on paper. I write like I’m running out of time. Always have, always will. So when Leslie sang that phrase to Lin-Manuel, I felt connected. Apparently, I am not alone. Hamilton has touched millions.

Despite Hamilton’s brilliance, those of you who only know Leslie from Hamilton are missing out. Check out his two jazz albums, especially his new one “Mr.” The man has a voice that stirs souls, mine included. Take a listen. You will not be disappointed.

My husband Ken, after 30 years of marriage and much more in tune with my fanaticism toward artists, created a special birthday gift for me. He decided we would sponsor the “Stronger Magic 2020 Tour” for my 60th. With a gaggle of friends, we saw Leslie open in Los Angeles this weekend. Last night, we saw him perform in Las Vegas. I felt like Mr I was waving at me, thanking me once again for our encounter and that dang suitcase for him that I bought at Walmart. I felt his presence and thanked him back. How lucky am I to mingle with these minds that channel our spirits?

Leslie, BTW, was sensational. The crowd ranged from a bouncing little boy – could not have been 6 years old to folks at least 60 years old (that’d be me). The little boy knew every word of “The Room Where it Happens” twisting his ball cap and gyrating to the beat.

Me? I preferred “Foggy” and sang every word.

Between the 6-year-old and me, there were people of all colors, all ages, doing the electric slide and swaying to the sweet vocals of this man in red with a message and his band. That’s quite a range.

That’s what happens with great art. Great art transcends race, age, religion, sex and connects all of us to the tune. It’s a spiritual tune, loud and clear, specific and universal, ancient and young in the same instant.

Our gaggle of friends sang bits from each of the Mr. album on the bus to the plane. We loved it, and think you might too.

Take a listen to Leslie, and let’s all sing along.

Update as of 3/18: Concerts in San Francisco, Portland and Seattle have been moved until October, the website has not been updated yet: Tour Postponed.

I have not received word as to whether the other concerts are cancelled, and the website has not been updated. I have cancelled my trips to Toronto. Boston and Brooklyn. I'd be shocked if they are still on, but who knows. Be safe.

"Struck by Living is just the kind of book that our field and our patients need."