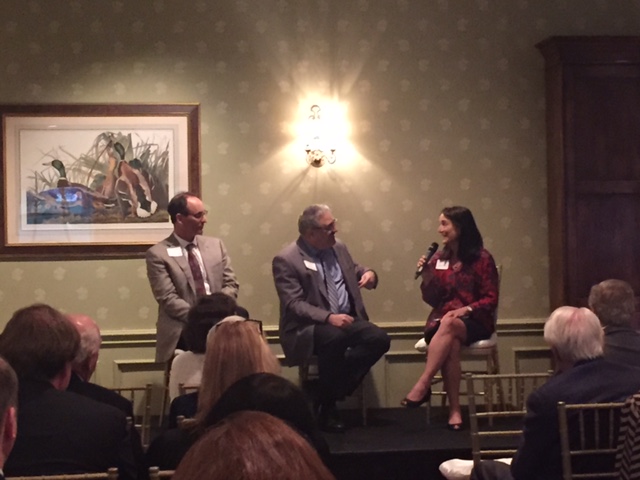 On March 8, 2017, Bonnie and Peter Smith hosted an event as part of the UTSW Peter O'Donnell Jr. Brain Institute.  I was on a panel with Dr. Marc Diamond – brilliant UT Southwestern research who is Director of the Center for Alzheimer's and Neurodegenerative Diseases and, moderated by Dr. Mark Dr. Mark Goldberg, Chair of the Department of Neurology and Neurotherapeutics at UTSW, Do you think I was a little intimidated? Yes!

Mark proved the most genuine moderator, he’s a friend and fellow lover of the arts (especially music, in Mark’s case). He bounced back between the two of us with ease and equal respect. The three favorite questions he asked of me were:

What is your dream for the Center for Depression Research and Clinical Care? I answered my dream would be to have eventually two things. 1) Some type of tool to help primary care physicians to better detect depression and bipolar disease at an early level, where we have the best chance of success for management of the disease and allowing people to live full, healthy and productive lives. 2) Tools to help physicians to direct people to the best portfolio of treatment for the fastest path to health (e.g., based on your biotype, you would do better on this class of medication versus that one OR you won’t be helped by medication at all, try brain stimulation, and/or change you diet)

What is the biggest thing the audience members can do to help further research in this area? I answered “be open with our stories,” Which led to the inevitable question from the audience about “stigma.” I argued that we need to stop talking about stigma and treat this as a real disease. My experience is the perception of stigma is far, far greater than the actual negativity we anticipate. I have had a handful of people be rude to me because I was open with my story. Thousands have not only thanked me for telling my story, they have shared their own. Depression/bipolar disease is everywhere. The faster we admit this, the faster we can commit resources to figuring out the problem.

How does it feel to be part of the team exploring this issue? This is what I love about Mark Goldberg. Smart people are not intimidated by those without a credential who can help further research. I told him I felt honored and humbled at the same time. These men are geniuses in their fields, so impressive. Yet both of them respected and elevated what I had to say. That’s team work in its finest form.

Dr. Diamond spoke about the new discoveries at the Center for Alzheimer's and Neurodegenerative Diseases at UTSW.  When asked about current treatments, he says,  "One could try puzzles or brain training, however there is not any treatment now that affects Alzheimer’s disease.  At the Center for Alzheimer’s and Neurodegenerative diseases, we are focused on finding true therapies to cure or halt the progression of dementia and related disorders.”

Dr. Diamond went on to talk about his vision for the center.  "We believe we will have therapies for patients that effectively eliminate Alzheimer’s and/or halt its progression.  This vision truly relies on continued community support as it greatly facilitates our ability to rapidly test our best ideas, and translate them into real treatments. Without that community support, the timeline will be substantially longer."