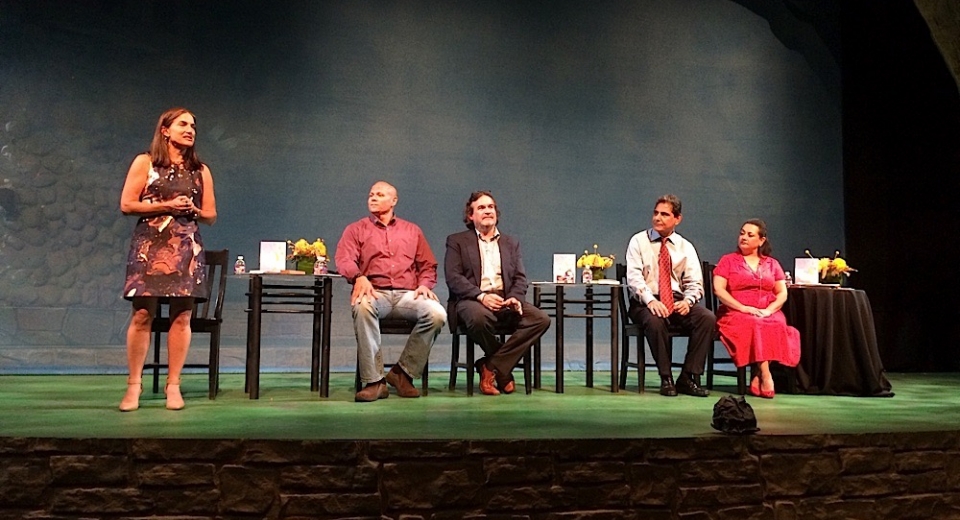 When I asked Jorge Correa about what we should do to launch Decidí Vivir to reach Spanish speakers, he wisely advised, “Latinos will come to a party, but they are not going to come to a talk about depression!” Listening to his advice, we garnered some good food and drink and put our depression experts on a glistening green-blue stage with a castle in the background. I knew it was going to be an interesting night when a young from the catering staff asked if he could have a book. “My brother,” he told me, “Killed himself when he was 19.” We spent several minutes talking before the event. It was clear this young man had not told his story to many people, certainly not a stranger he had just met. But as has happened many times before, being open about my story swings wide the door so others can release theirs. He seemed visibly relieved to know that someone else could listen without judgment. I told him as I tell all people who have lost loved ones: “What your loved one did is not out of lack of love for you.”

In an attempt to make this truly a bilingual event, we had two large screens on either side of the panel with a simultaneous Spanish translation. Yessina Camacho volunteered her fast fingers for this monumental task. Having studied Spanish a bit, I’m always amazed how the meaning of a sentence can change completely from the beginning to the end of a sentence. Can you imagine doing this with a topic as complex as depression? Gracias, Yessina for your incredible work.

I kicked off the event, explaining that Decidí Vivir has been a collection of coincidences that in retrospect seem far too coordinated to be left to chance. As many of you know, in 2010 I published Struck by Living, my personal story about my struggle with depression, suicide attempts and recovery. During that initial book tour we experienced:

Those coincidences led to a whole other set of connections that is beautifully described in Will Clark’s article “A Translator and a Life Saver.” Ana Cristina Reymundo led the panel, an impressive woman who is an award-winning journalist, who has been named as one of the Top 50 Most Influential Hispanic Journalists in America. In 1999 she launched Nexos magazine, published bimonthly in Spanish, Portuguese and English – which now reaches 42 million readers world-wide, the most widely read Spanish magazine in the world. She’s fluent in 7 languages, and has orchestrated events to integrate people from different cultures for the sake of business, health care, fashion, faith and tequila.

Panelists included Dr. Ahmad Raza, who heads the inpatient unit at Zale Lipshy where both Jorge’s wife (Patricia) and I were treated, Jorge Correa, Dr. Abel Tomatis, a bilingual psychologist who specializes in adolescent care and me. When the discussion took a heavy, serious turn, Jorge lightened room with his wry sense of humor. My favorite parts of the evening were reconnecting with old friends and meeting new friends. Jorge’s son, Simón, who I had never met, took off work to attend. Like his father, Simón is a gentle soul who assured me that I always have a special place in their family. Again and again, I am touched by the tenderness and affection of people who speak Spanish as a native language. Makes me want to be a Latina. Perhaps in a small way, Decidí Vivir has allowed that to happen.

I just published a Psychology Today article about special insights gained from this event: A Shared Experience Heals Two from Two Cultures

"Great insight into the mind and life of someone struggling with this devastating illness. Enjoyable, informative and touching, Struck by Living may assist those suffering with major depressive disorders to recognize and get help for their symptoms earlier."